Get recommended reads, deals, and more from PublicAffairs 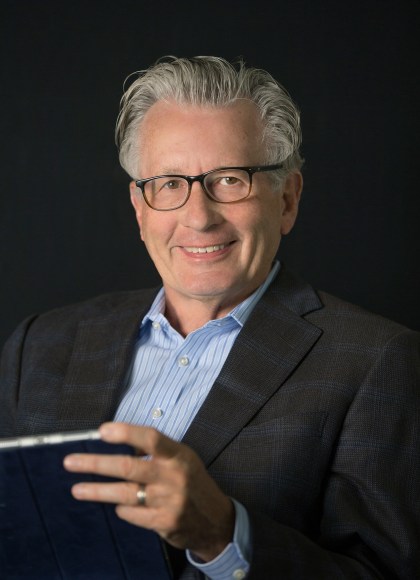 Nigel Travis, the chairman of Dunkin’ Brands, was the company’s chief executive officer from 2009 through 2018. His distinctive human-centered perspective on leadership and management, now viewed as essential in today’s complex and diverse global organizations, took root early in his career when he was a human resources manager.

The first meeting of my management team, in January 2009, was a total bust.

We assembled in the conference room at corporate headquarters in Canton, Massachusetts, a suburb about fifteen miles south of Boston, not far from Quincy, the town where Dunkin’ was founded. There were ten members of the leadership team in the meeting, most in the room, a few on the phone. All the key disciplines were represented: the heads of U.S., international, marketing, human resources, legal, strategy, finance, and operations and some of their staff people. I didn’t know any of them very well; the majority of them were long-term Dunkin’ people who had worked together for years and knew the operations of the company far better than I did.

I welcomed everyone to the meeting and set out my agenda for the session: the goal was to explain my values, talk about the culture I wanted us to build at Dunkin’, and discuss together any changes we might need or want to make as we prepared for the public offering.

“Anybody want to add anything to that agenda?” I asked. “Any further thoughts? Questions?”

I looked around the room. All I got were little head shakes and murmurs of approval. Nobody had anything to add. No burning questions. No hearty agreement. No dissent.

“OK,” I said. “Good.” But it wasn’t good. I suddenly felt very heavy, as if the atmosphere in the room was thickening and pushing me down. I’m sure you know the feeling. “Well then, to start off, let me briefly tell you a little about myself,” I said. “And where I’m coming from.”

Stony faces. They looked as if they were preparing to be shot.

“I actually began my career in HR,” I said, as if that might be of some surprise or interest to the people in the room. Not so much. Blank looks.

I briefly skipped through the highlights of my career: my father the entrepreneur, the Brit upbringing, the stints at Grand Met, Burger King, Papa John’s, and Blockbuster. No comments. No questions. Just little noncommittal head bobs.

Then I began laying out my vision for Dunkin’ Brands: how I wanted to create a culture where all the constituencies could collaborate to improve operations, move forward with technology, innovate in food and beverage offerings, widen our customer base, expand into new geographies in the U.S. and abroad, while leveraging the fabulous Dunkin’ and Baskin-Robbins brands. And, of course, achieving a successful public offering within the next two to three years.

As I talked, I could feel the room fill up with fear, anxiety, uncertainty, hesitation, resistance, and doubt.

At the end of the meeting, which lasted about an hour, I felt profoundly frustrated. Clearly the leadership team, as it was then configured, did not have the challenge skills I was expecting and knew we needed. In a challenge culture, the meeting would have gone very differently. People would have felt free to make suggestions, ask questions, push back, and voice concerns and enthusiasms. What I got instead was guardedness and protectionism. I knew that things would have to change.

The first thing I did was make the leadership team meetings a weekly event, instead of monthly. We needed more time together. And I wanted to know sooner rather than later whether this group could shed the habits they had developed during years in the Dunkin’ culture. I realized that they, like the franchisees I spoke with, had been operating in an authoritarian world where there had been little effort to bring the constituencies together.

The answer for eight of the ten was no.

There was no wholesale housecleaning, no purge. Rather, one by one, it became clear that the person and the new culture were not compatible. Some left of their own accord. Some
I dismissed.

Throughout that period, I followed a few rules: state expectations, change people when needed, recruit people who can help build the culture, surround the team with talent. You need to state your expectations of people and the culture very clearly, and do it early and often. I had done this in that first meeting and continued to do so. You have to be explicit
about what you want and why you want it, and you have to say it over and over, while you’re modeling it. There is no shortcut. If people cannot change, you’ll have to change the personnel.

I don’t believe that it is always necessary for a new management team to oust the old team and bring in a whole new one. When I joined Papa John’s, for example, I did not change one member of the team. But when it is necessary, the changes must be made resolutely and, again, with the reasons made explicit. It’s essential to recruit people that you know will help reinforce the culture you want. People with skills in challenge, who aren’t afraid to question, who know the value of pushback. Finally, be sure to surround your leadership team with talented people who have a range of perspectives and can help the leaders look at the business in new ways.

"Business and politics have become ever more competitive and unpredictable. In order to succeed in this environment, Travis introduces The Challenge Culture where employees are encouraged and are sufficiently self-confident to push back, engage in debate, and, along with their leaders, search intensively for the best answer to critical issues. A must-read for all people leading organizations in these turbulent times!"—Larry Bossidy, retired chairman and CEO of Honeywell International, coauthor of Execution: The Discipline of Getting Things Done
"A culture built on open dialogue and honesty will deliver collective positive outcomes for customers and team members."—Catherine D'Amato, president and CEO, The Greater Boston Food Bank
"What a wonderful read, with terrific, memorable thoughts, and a powerful theme: what is essential for a successful business is the ability to question the leadership and ask 'why?'. There are more lessons to be learned than offered by any Harvard MBA."—Jack Cowin, chairman and managing director, Competitive Foods Australia Ltd
"Nigel understands the intricacies of everything. And, even better, he knows how to put them together to make a business run the way it should. This book not only takes you inside his businesses, but inside the mind that challenged them to thrive. If you can use 20 percent of what he's suggesting, you'll be ahead of the game. Use 40 percent and you can blow the doors off."—Mark Goldstein, former chief marketing officer, BBDO Worldwide
"The Challenge Culture is a must-read for those wanting to improve their leadership skills in light of a fast changing social and political workplace environment. Nigel implores all of us to foster an open and engaging culture of challenge. For over three decades, Nigel has been at the helm of internationally recognizable organizations, and the insights of The Challenge Culture provide a powerful playbook for people across the business world."—Sam Kennedy, president and CEO of the Boston Red Sox
"We all know that America runs on Dunkin', but have you ever wondered how Dunkin' runs? Dunkin' Brands chairman and CEO Nigel Travis has experience running some of the nation's largest franchises and shares his insight on the importance of creating a challenge culture, one that questions the status quo, encourages internal pushback, and helps companies be nimble enough to adapt to change. The Challenge Culture is a must-read for employers and employees alike, and promises to get ideas for long-term success percolating."—Robert Kraft, chairman and CEO of the Kraft Group and The New England Patriots
"Nigel Travis has been at the top of major maverick enterprises which missed moments for vital re-invention as well as those which seized the moment for needed transformation. I knew Bill Rosenberg, the visionary founder of Dunkin' Donuts, well and he'd have loved the challenge culture Travis helped inspire there today. Dissent is not disloyalty but can be the spark for innovation and the safeguard for integrity. Firms from the governance financial frauds of Enron and Worldcom to the privacy and gender 'bro cultures' at today's tech titans would have benefited from Travis' leadership lessons. Conformity kills creativity and subverts justice and The Challenge Culture is the antidote to a contagion of conformity across sectors."—Jeffrey A. Sonnenfeld, senior associate dean for Leadership Studies and Lester Crown Professor of Leadership Practice, Yale School of Management
"Smart and insightful, this work offers an insider's account of the leadership approach behind a successful global brand that executives in any industry can emulate."—Publishers Weekly
"Women, especially young women, in today's world need to understand the importance of challenging authority and speaking up to share their point of view. The Challenge Culture brilliantly explains how to do it."
—Nicole Lapin, author of Boss Bitch and Rich Bitch
Read More Read Less 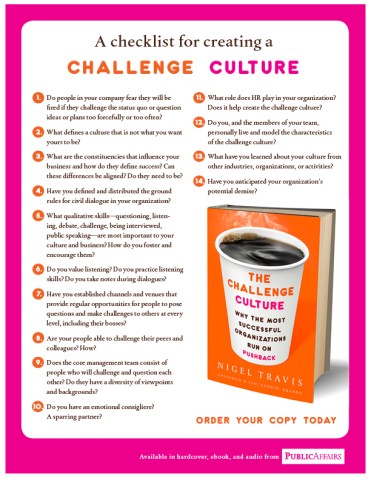 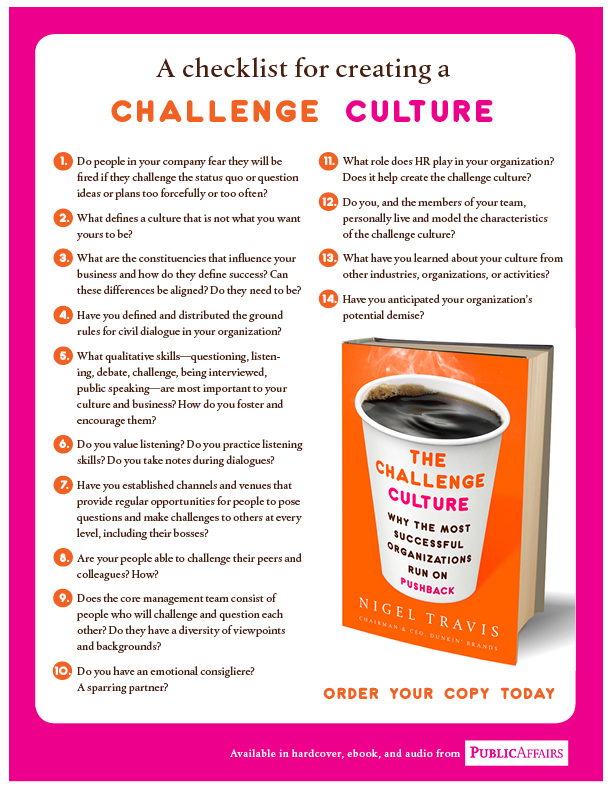